THE HISTORY OF MUSCLE BEACH CALIFORNIA

What began as a venue for people in Santa Monica to watch acrobats, gymnasts, wrestlers, and stunt performers practice their fantastical acts for films being shot during the Great Depression (to distract people’s attention from their own financial crises), the Original Muscle Beach in Santa Monica, located just south of the Santa Monica Pier, quickly became a popular attraction in LA County for beachgoers and athletes alike.

While the name “Muscle Beach” didn’t catch on until later in the mid-1940s, the beach was known simply as another of Santa Monica’s parks owned and maintained by the Santa Monica Parks and Recreation Department. The Works Progress Administration (WPA) installed exercise equipment at what is now known as Original Muscle Beach Santa Monica where gymnastic and acrobatic exhibitions were regularly held.

As word spread of the new and exciting beach attraction that was bringing athletes from a variety of disciplines like outdoor wrestling and even circus performers, the beach park at Santa Monica came to be known as the place-to-be for celebrities, actors, stunt people and of course, bodybuilders. 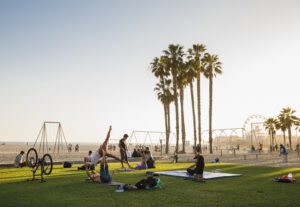 International fame continued to grow around this muscle beach in Los Angeles and gymnasts and athletes from all over contributed to it by providing their own gym equipment like bars, benches and weights, to help widen the breadth of activities that were offered at the park.

By the mid-1950s, Muscle Beach had established worldwide fame and became the reason there was such a large fitness movement in Santa Monica which spread quickly to surrounding cities in the region. The California fitness movement took off and in 1989, the City of Santa Monica officially rededicated the park as the Original Muscle Beach, which still serves gymnasts, acrobats and youth today.

Officially titled in 1987 by the City of Los Angeles with ‘Venice’ as to honor the Original Muscle Beach in Santa Monica, Muscle Beach Venice is the second most popular “Muscle Beach” in the area and is more focused on the weightlifting aspects of physical fitness compared to Santa Monica’s gymnast-focused environment. 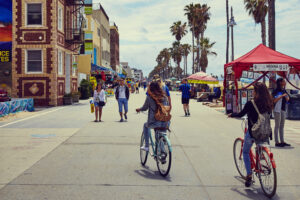 Muscle Beach Venice is two blocks north of Venice Boulevard on Ocean Front Walk in Venice, California, open 7 days a week, offering yearly, monthly and day passes. Gaining fame and momentum from the Original Muscle Beach in Santa Monica, Muscle Beach Venice became well-known for barbell, weightlifting and bodybuilding as well for the events that took place at the Venice weight pen. Celebrities and bodybuilders like Arnold Schwarzenegger, Lou Ferrigno, and Jack Lalanne have worked out at Muscle Beach Venice.

A small spartan pen was built near Windward Avenue in 1952 that was later replaced during the renovation of the beach in 1990, which now proudly displays a huge concrete barbell on the roof and bleachers for spectators to observe this open playground. A separate gated area is also provided that encloses weightlifting equipment as visitors are invited to watch the very dedicated individuals that frequent Muscle Beach Venice work on their physical form and fitness.

Where to Stay Near The Original Muscle Beach Santa Monica 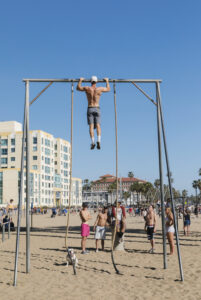 Shore Hotel in Santa Monica is a LEED certified property that offers eco-friendly accommodations with stunning views of the Pacific Ocean. With perfect views of Santa Monica Pier and Original Muscle Beach as well as popular shopping districts, Shore Hotel is a great place to start exploring Santa Monica.

The Georgian Hotel is one of the only places to experience true 1940s Old Hollywood glamour near one of the finest beaches in Los Angeles. Enjoy signature cocktails from the Veranda Restaurant as you take in the beautiful Southern California sunset — you won’t be disappointed by the beachfront views, great food and great music.

For other luxury hotels in Santa Monica near Original Muscle Beach, visit Viceroy Santa Monica, Loews Santa Monica Beach Hotel, Shutters on the Beach, Le Merigot Santa Monica, or Hotel Casa del Mar. These seaside beach havens offer expansive pool terraces and spacious rooms that provide sophisticated guest comfort. If you want to be close to everything you could want in Los Angeles, choose one of these luxury accommodations.

Ocean View Hotel and Sea Blue Hotel, also located close to the beach and the famous Santa Monica Pier, are additional budget hotel options for your stay in Santa Monica. These charming Cali-style hotels let you experience the area like a true local: comfortable and laid-back.

With 41 hotels in Santa Monica, planning your stay is easy – whether it’s near Original Muscle Beach or in one of the city’s eight diverse neighborhoods.