SMTT’s 2015 Tourism Economic and Fiscal Impact summary report was presented during the Summit, underscoring a local tourism industry that remains strong while generating steady growth in jobs and spending and tax revenues. The report, conducted annually to track the economic impact of tourism for the destination, provided insights on both Santa Monica’s visitor population and those visitors’ spend in the city. In 2015, tourism spending injected $1.84 billion into the local economy, providing over $58 million directly into the city’s general fund. The report also highlighted that tourism supports an estimated 13,500 jobs that cannot be exported outside of the city, and that Santa Monica hotels’ average daily rates and occupancy levels remain some of the strongest in the region.

These figures reflect the strength not only of the Santa Monica travel industry, but also that of California’s. According to the recently released economic impact report from Visit California, the state’s official tourism board, California’s travel industry continued to expanded for the sixth straight year following the 2007-2009 recession. Direct travel spending reached $122.5 billion in 2015, while travel-generated tax revenue hit $4.6 billion. Travel industry employment totaled 1,064,000, a 3.7 percent increase from the previous year.

“The state of Santa Monica’s travel industry is strong, yet the continued stewardship of our visitors and their robust spending power remains paramount,” announced Kerns. “Three years into our five-year strategic plan, we are seeing powerful contributions to our city’s local economy through the hospitality community’s efforts to drive balanced demand, stimulate job growth and fill identified need periods. We must continue to strategically target the overnight hotel visitors who are not only of the highest economic value for the city, but are also the least likely to drive once they have arrived – in fact, 76.2% of our visitors walked as their primary method of transportation to get around Santa Monica once they arrived in the city.”

Mayor Tony Vazquez echoed these sentiments, noting, “The economic benefits of tourism are felt all throughout the city. Santa Monica is proud of the world-class parks, schools, beaches, public transportation and local police and fire departments that our residents enjoy daily, all of which are funded in part through the revenue generated by tourism.”

Learn more about the economic value of tourism at www.santamonica.com/about-smtt/economic-value-of-tourism.

Melanie Lawson, sales and catering coordinator at DoubleTree Suites by Hilton Hotel Santa Monica, was awarded the Thelma Parks Tourism Spirit Award during the Summit for her exceptional service in the hospitality industry. Lawson was awarded a $1,000 scholarship and a two-night trip to Greater Palm Springs, provided by SMTT, the Santa Monica Chamber of Commerce and the Greater Palm Springs Convention and Visitors Bureau. To learn more about the Thelma Parks Tourism Spirit Award and to submit nominations, visit www.santamonica.com/spiritaward.

Santa Monica Travel & Tourism (SMTT) is a non-profit organization designed to increase visitor expenditures, tourism revenues and local employment opportunities through the promotion of Santa Monica as a travel destination. For travel and accommodation information or a free copy of the official Visitors Guide, the public can write to the Santa Monica Visitor Center, 2427 Main Street, Santa Monica, CA 90405; call (800) 544-5319 or (310) 393-7593; visit www.santamonica.com; or email info@santamonica.com. Follow SMCVB on Twitter @GoSantaMonica or become a Facebook fan at www.facebook.com/visitsantamonica. 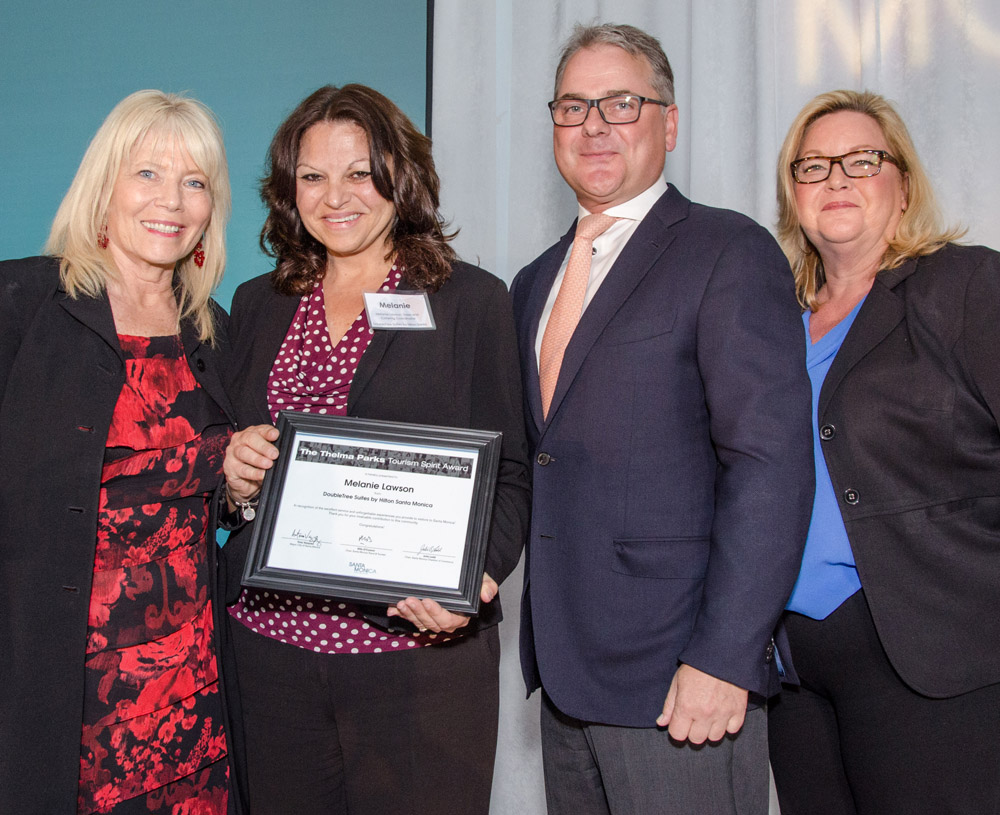