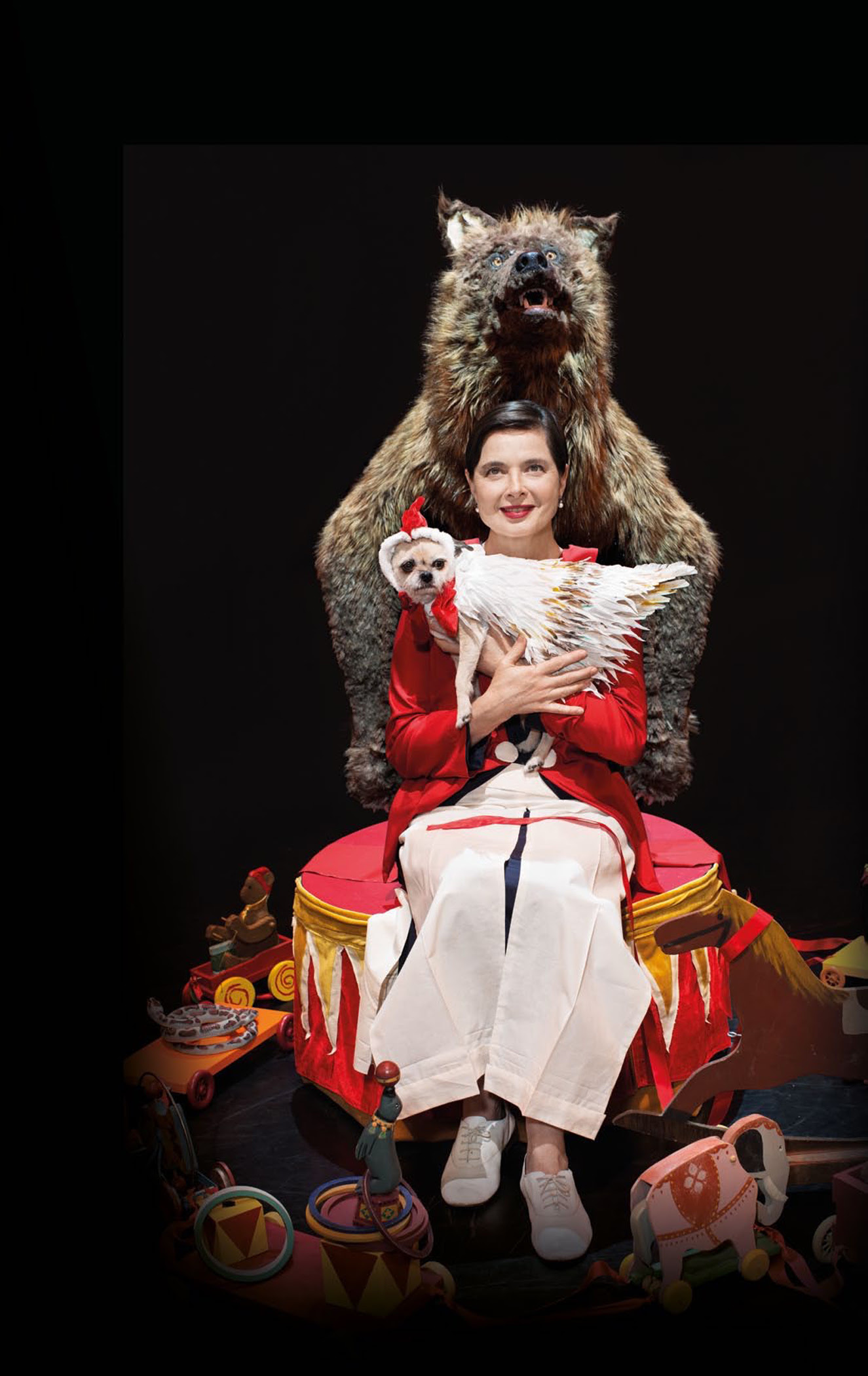 The Broad Stage presents Golden Globe Award-winning actress and filmmaker Isabella Rossellini, who takes inspiration from the natural world, in her new theatrical evening Link Link Circus for three performances only January 25 and 26 at 7:30 p.m. and January 27 at 2:00 p.m.
Link Link Circus is a comedic and scientifically informed look at the links between humans and animals, via Darwin’s theory of evolution. Rossellini is a vivid monologist exploring the brilliance of the animal kingdom. The show is illustrated with her short comic films, home movies, and animation. Rossellini transforms herself into Aristotle, Descartes, a medieval theologian, B.F. Skinner, Charles Darwin and other helpful thinkers of the past, while her dog Pan plays various animals, assisted by puppeteer and animal handler Schuyler Beeman.
Rossellini discusses the essence of human beings and what distinguishes us from the “brutes.” Darwin, in his theory of evolution, linked humans to non-humans, demonstrating that there is a continuum between animals and humans. “For some, this idea is still offensive. While physical continuity is more accepted, cognitive continuity is mostly rejected.”
Rossellini is completing a Master’s degree in Animal Behavior and Conservation at Hunter College in New York City and has received a PhD Honoris Causa from the Science Faculty at UQAM (University of Quebec at Montreal. She said the her true calling “is about animals. I wanted to do it my whole life, but then modeling started, acting started, and I didn’t do it. It’s funny, when I was a little girl and had my little dog and it seemed that we understood each other so well, I was asking questions about how much animals think and feel emotion. I’m still asking.”
Following her widely acclaimed Green Porno (adapted from the celebrated Sundance Channel series) that explored the sexual behavior of other species, Link Link Circus addresses the latest scientific discoveries about animal minds, intelligence, and emotions.
Link Link Circus is Rossellini’s first original performance since Green Porno, written with Oscar-winning screenwriter Jean-Claude Carrière, directed by Muriel Mayette, and based on the series of short films produced by the Sundance Channel. Green Porno toured to 50 cities in 2015. Reviewing the work, at BAM, for New York Magazine, Jesse Green wrote that Rossellini is “the best professor you could ever imagine: witty, lovely to watch,” and that Green Porno is “about as much fun as you can have learning about the fun other creatures are having.” The Hollywood Reporter called her performance “impossible to resist.” Theatermania observed, “Staged with its tongue firmly implanted in its cheek, the evening enjoyably flits by with many belly laughs and a whole lot of knowledge.”
The New York Times said about Link Link Circus and Ms. Rossellini, “who runs a farm on Long Island and has been working on a master’s degree in animal behavior and conservation. She delivers a ‘theatrical conference’ about the nonhumans with whom we share this planet, using puppets, projected drawings and animated videos to illustrate her points. Ms. Rossellini talks about how she has loved animals from a young age, and mentions her involvement with the Guide Dog Foundation in a segment that is typically funny, touching and informative … it is hard to deny how pleasurable Ms. Rossellini’s company is. And have I mentioned there is a dog?”
In addition to Rossellini (performer, co-director, co-producer), the creative team includes Rick Gilbert (set designer and line producer), Andy Byers (set designer, costume designer, composer), Guido Torlonia (co-director), Bill Berloni (animal director), Schuyler Beeman (puppeteer, animal handler), Fanny Karst (ring leader costumes), Andy Smetanka and Courtney Pure (animations), Gina Freedman (props), Stacey Foster (film and audio clips editor), and Jason L. Miller (technical director).
Link Link Circus is co-produced by Teatre Akadèmia.