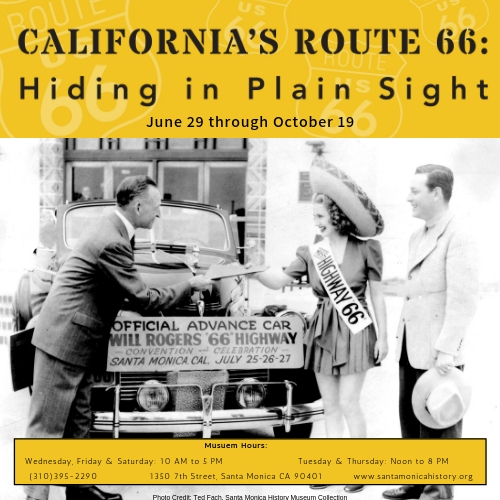 Santa Monica History Museum is excited to announce the opening of their new exhibition, “California’s Route 66: Hiding in Plain Sight.” The exhibition will run June 29 through October 19 at the museum’s premises at 1350 7th Street, Santa Monica, CA 90401.
Route 66, a 2,448-mile long road connecting Chicago to Los Angeles, became a symbol of the mystique of the open road and an icon of Americana. It figured largely in the history of western expansion in the 20th century, from the desperate 1930s Dust Bowl migration to rambling road trips in the 1950s and 1960s. To illustrate the Route’s history, the exhibition will feature artifacts such as early driving guides, iconic signage and ephemera, and historic photographs from the Santa Monica History Museum Collection. A rare manuscript map for “Proposed Highways,” from the height of the 1920s Good Roads Movement, will also be on display.
“This exhibition aims to go beyond what people know about the Route – or think they know,” says John Klopping, museum manager at the Santa Monica History Museum. “We wanted to highlight some of Route 66’s hidden history, including the stories of the road’s California stopping points and what it was like for minority groups to travel the road.” The exhibition will contain reproductions of the Green Book, a series of guides that enabled safer travel for African Americans from the 1930s-1950s and recently featured in the Oscar-winning film Green Book. Examples of Route 66’s significance in popular culture through film, literature, and art will also be on view.
Route 66 has a special resonance in Santa Monica history, as the road ends at the intersection of Lincoln and Olympic Boulevards. The exhibition will explore the legacy of “the end of the trail” in Santa Monica, as well as the role that famous local figures like Will Rogers played in promoting Route 66. “The story of Route 66 reflects American history over the 20th century,” says Sara Crown, archivist at the Santa Monica History Museum and curator of the exhibition. “With this exhibition, we hope to shed light on both its history and the contemporary preservation efforts.”
The exhibition was developed with the support of the California Historical Route 66 Association. Expert talks are planned to accompany the exhibition, which will feature aspects of the route’s history and current travel recommendations. An opening preview will be held on Thursday, June 27, from 6 PM to 8 PM. The preview is free for museum members and $30 for non-members. Guests purchasing tickets will receive a complementary individual membership to the museum. The full schedule will be available on the Santa Monica History Museum website.
The museum and exhibition are open to the public Tuesdays and Thursdays noon to 8:00 PM, and Wednesdays, Fridays, and Saturdays 10:00 AM to 5:00 PM. The museum is closed Sundays and Mondays. General admission for adults is $10.00 ($15 for 2 adults) and $5.00 for seniors & students. Veterans, active-duty military, children 12 and under, and Santa Monica History Museum members receive free admission. Please direct questions to John Klopping, Museum Manager, at (310) 395-2290 or info@santamonicahistory.org.