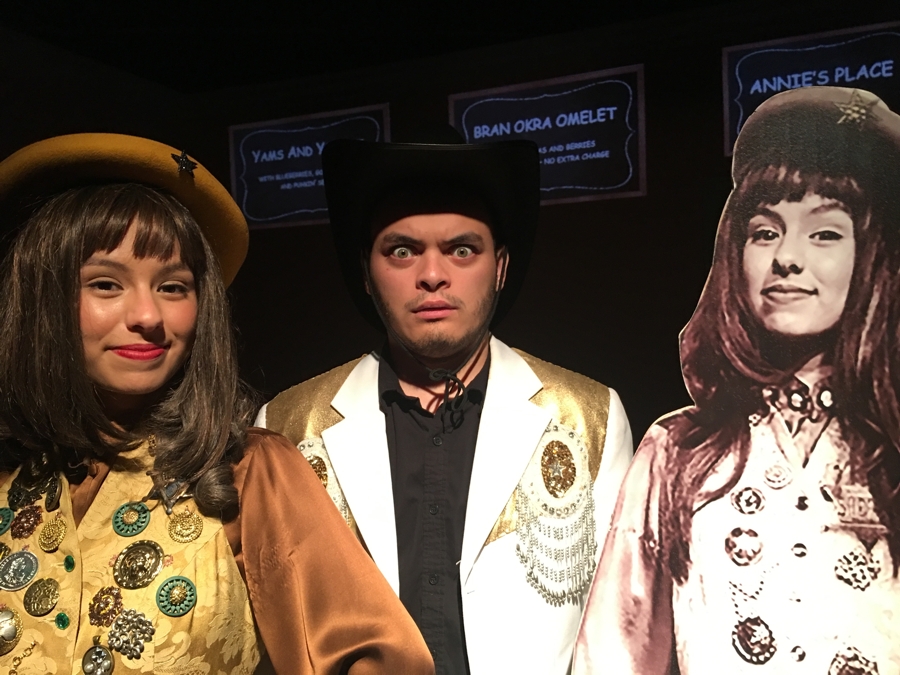 “A hilarious musical melodrama!” raves LA Parent. An Our Times “Best Bet!” It’s the heart-warming rhythm and boos musical comedy that offers a new twist on what makes a hero and how legends are made. Boo the villain and cheer the heroine in the true spirit of the American Melodrama.
Annie Oakley coming back to life in 2018? Impossible. But that’s exactly what happens as the legendary heroine comes to the aid of a single mom, Kat, and her daughters, struggling to find a balance between the bottom-line temptations of modern living and the comforting solid roots of tradition. Should Annie’s Place, passed down through the generations of women in Kat’s family, a local gathering place celebrating wild-west tradition become the new-fangled, modernized Princess Café? That’s exactly what wealthy land-owner Marvin Q. Moneypots wants! But is the “out with the old, in with new” Moneypots mentality the right one? Should Kat give up her family legacy? Should Princesses replace Cowgirls? Or is there a way to unite the old and the new? Audiences help Annie, Kat and her daughters hold their own against smarmy villain Marvin Q. Moneypots, find a way to be their own heroes, and create a whole new family legend.
Although one of the most famous sharp-shooters of her time, Oakley preferred words rather than a pistol, and was one of the first celebrities to actively lobby for equality and women’s rights. Legends and stories of Annie Oakley abound. We know she was a real person, a celebrity, the star of Buffalo Bill’s Wild West Show along with her husband Frank E. Butler. We know she was an activist for equality and women’s rights as far back as 1898. And there are rumors that at one time she was an actual sheriff. As for the rest, books, movies and musicals each have their own point of view, depending on who is writing the story. We like to think of her as a friend to the downtrodden, a crowd-pleaser to her audiences, and a role model for women everywhere.
Based on a short story by Emery Bernauer and written and directed by Chris DeCarlo & Evelyn Rudie with lyrics and music by E. Rudie, Annie Oakley and the Princess Café features Actors’ Repertory Theatre company members Tiffany Haile, Sarai Jimenez, Chelsey Maus, Cydne Moore, Elena Rust and Bradley Sharper. The production, one of sixteen original fairy tales that are part of the Santa Monica Playhouse Family Theatre Musical Matinee Series, cuts across the imaginary generation gap by providing an experience that the entire family can enjoy.
EXTENDED FOR FOUR WEEKS ONLY! Sat 2pm, Sun 12:30, April 7-29, 2018.