All Night Horrorthon at the Aero Theatre 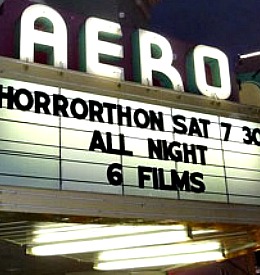 This event is sold out. There will be a stand-by line.
Spend all night at the Aero Theatre’s 14th annual Horrorthon! Complete with between-film free food, giveaways from Scream Factory, trailers, crazy characters and surprises!
Films include:
CRITTERS, 1986, Warner Bros., 82 min. Dir. Stephen Herek. A spaceship filled with the fuzzy alien monsters of the title lands in a Midwestern town and proceeds to wreak havoc, while a pair of intergalactic bounty hunters on the critters’ trail causes even more chaos. What could have been a mere GREMLINS rip-off becomes a witty comedy as well as a swiftly paced action film in the hands of director Stephen Herek, who blends the anarchic spirit of classic Warner Bros. cartoons with a Spielbergian sense of the fantastic.
HALLOWEEN II, 1981, Universal, 92 min. Dir. Rick Rosenthal. Penned and produced by John Carpenter and Debra Hill (the same team responsible for the initial installment in the series), this smash sequel picks up right where HALLOWEEN left off. Dr. Sam Loomis (Donald Pleasence) is still searching frantically for his homicidal former patient Michael Myers, who in turn is trying to find Laurie Strode (Jamie Lee Curtis), the teenage girl who somehow managed to evade him in the first film. With Lance Guest.
LISA AND THE DEVIL (LISA E IL DIAVOLO), 1972, Kino Lorber, 95 min. Dir. Mario Bava. First released in the USA in an alternate edit with some different footage as THE HOUSE OF EXORCISM (to phenomenal success), this is one of Mario Bava’s masterworks. Tourist Elke Sommer is lured by devil Telly Savalas into a household of white lilies and rotting corpses. Caught in a time warp of decadent, aristocratic decay and horrifying, half-remembered memories of a fatal amour fou, Sommer tries desperately to find her way out of the nightmare. But there may be no escape. Elegiac and dreamlike, with Bava’s own poetic brand of morbid, melancholic lyricism. “Beautifully filmed and exquisitely scored by Carlo Savina … as much a dreamy art film as it is a European horror opus. Many of the images rank among Bava’s best … with a strange and haunting finale that offers several levels of interpretation.” – Mondo-Digital.com; “…a hauntingly beautiful poem about decay and death.” – Phil Hardy, Overlook Film Encyclopedia of Horror.
RUBY, 1977, AGFA, 85 min. Dir. Curtis Harrington. Fresh from portraying the bible-thumping mother of CARRIE, the mighty Piper Laurie leapt into the title role of this undeniably abnormal horror yarn from Curtis Harrington (QUEEN OF BLOOD; The KILLING KIND). Sixteen years after the murder of her mob boss husband, Ruby’s drive-in movie theater is plagued by a series of mysterious and potentially supernatural homicides. It’s a confounding whirlpool of spectral retaliation and demonic obsession. And like Carrie, Laurie’s new on-screen daughter also has powerful telekinetic abilities…
BUTCHER, BAKER, NIGHTMARE MAKER, 1981, 96 min. Dir. William Asher. Also released as NIGHT WARNING, this tale of repressed urges and homicidal rampages stars Jimmy McNichol as a high school basketball player living with an overprotective aunt (Susan Tyrrell) fond of drug-laced milk and machetes. Bo Svenson co-stars as the homophobic cop tasked to investigate when the bodies start turning up.
DEMONOID: MESSENGER OF DEATH, 1980, AGFA, 78 min. Dir. Alfredo Zacarías. A mining mishap in Mexico unlocks an ancient curse of a demon that only possesses people’s left hand. Once it takes hold of the appendage, it causes pain, suffering and gory death. The only way the possessed can free themselves is by cutting off their hand. In the tradition of Oliver Stone’s THE HAND and EVIL DEAD II comes the ultimate killer-hand film.
THE CRAZIES, 1973, AGFA, 103 min. Dir. George A. Romero. A virus bio-engineered for combat infects residents of a small Pennsylvania town, turning them into psychopaths. When the military establishes a quarantine to stop the virus from spreading further, a group of uninfected people tries to escape the blockade, coming up against both neighbors-turned-lunatics and an army ordered to kill anyone who comes their way.
Special Horrorthon prices: General $25, Student/Senior $23, Members $20 – includes all-night food and coffee. No vouchers.
Screening format: 35mm for all films except LISA AND THE DEVIL (DCP)

Join us at the Santa Monica Pier once a month for a curated series for locals. Gather your friends and family and head down to the Pier for this…